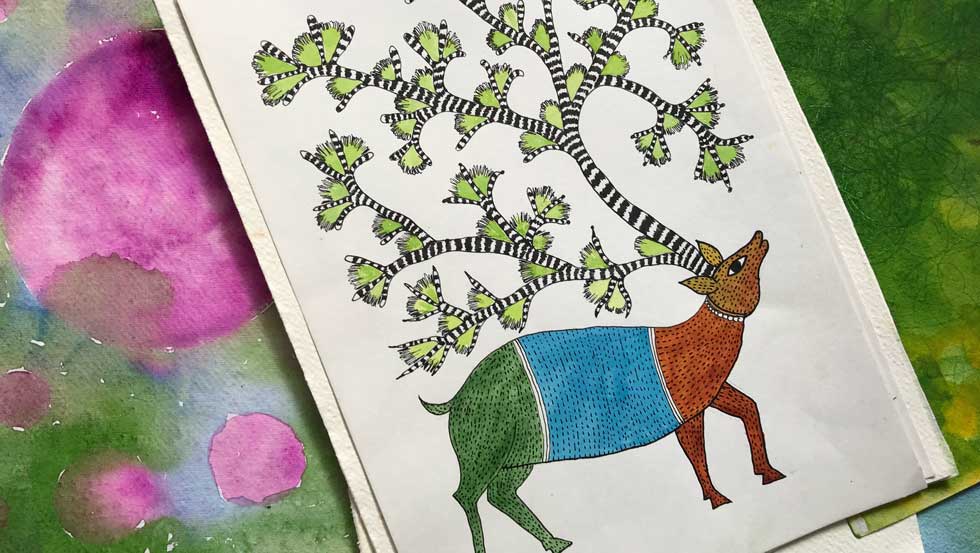 By Payal TailorOctober 31, 2021No Comments

Gond art is a form of painting from folk and tribal art,  and it is the art that is practised by one of the largest tribes of India and it shares its name with that tribe.

The word Gond comes from the Dravidian expression, that is, Kond which means “The Green Mountains”. Madhya Pradesh is the place where the Gond art is considered to be predominant, but it is also quite common in various other places such as Andhra Pradesh, Maharashtra, Chhattisgarh and Odisha.

And the popularity of the Gond art has increased to such a level that now the Government of India has to step in to preserve this art form for future generations so that they can enjoy it too.

History of the Gond Art:

The history of the Gond people is one that dates back to nearly 1400 years, but it is also said that Gond people could be imitating their ancestors as there is proof of cave paintings.

And for the Gond tribe, paintings and other art forms are quite popular. And even when we talk about the Gond people, the most prominent ones were the Pardhan Gonds, and they were very renowned for their artistic and music musicals.

Gond people decorate the walls of the house and even floors with traditional motifs and tattoos as they used to believe that viewing a good image begets good luck. And even the Gond people used the Gond art as a way of theirs to record their history.

The inspiration source for the Gond Art:

According to the Gond tribe, their belief system states that everything present on this Earth, that is, hill, river, rock or tree is sacred as it is inhabited by a spirit.

It also showcases a close connection or relationship of man with the natural resources and Gond art take inspiration not just from nature but also from myths and legends of India.

Even they showcase the daily lives of the tribes and even some abstract concepts like emotions, dreams and imagination.

‘On line work’ is the phrase that would best describe Gond Paintings. Whenever an artist is doing Gond art, it takes much care of the inner as well as outer lines because of the perfection of the lines, it would have an immediate effect on the audience or the viewer.

Lines, dots and dashes are used as it imparts a greater sense of movement and the details are also increased because if this.

And in the Gond painting, another striking feature is that various bright vivid colours are used such as white, red, blue and yellow.

Paints that are used in Gond art are made of natural objects such as charcoal, coloured soil, plant sap, leaves and even cow dung is also used. And now, Gond artists have also started to use poster colours and canvas to paint on.

Gond’s inherited skills and creativity can be depicted when they showcase the village life and the human figures are blended with rituals and nature and it is done by painting with several bright colours and by the placement of motifs.

And Digna and Bhittichitra are the present-day Gond paintings that are evolved. The Gond art Digna is done on the walls and floors of the house by a traditional geometric pattern.

Bhittichitra includes the paintings of images of animals, plants and trees which are painted on the walls of the houses.

Interesting, right? Want to learn Gond art? Pencil and Chai Fine Arts Gurukul is coming up with this amazing course of learning Gond Art after Navratri. Enrol yourself to this course and get the best guidance and learn more about the Gond art- a Folk Art!