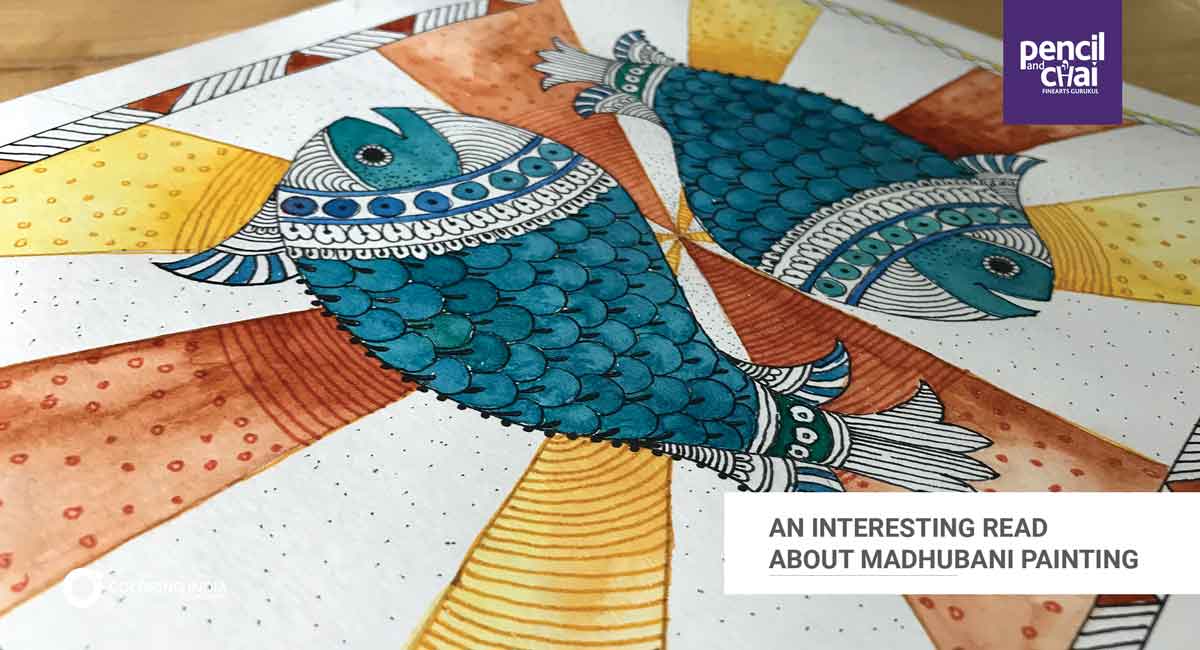 Madhubani Paintings- The Beginning Of An Evolution

MADHUBANI ART ~ The Beginning Of An Evolution

THE MYTHOLOGY BEHIND MADHUBANI PAINTINGS

Madhubani Paintings revolve around a historical tale. It goes back to the era of Ramayana when King Janak, Sita’s father asks few painters to create Madhubani paintings for his daughter’s wedding.

Since then, many generations have been embellishing their homes with this art.

Madhubani is a district in Bihar. It is the heartland of Mithila, an ancient country for the Maithilis. Mithila has played a noteworthy role in contributing to India’s heritage and culture.

Madhubani ( a.k.a. The forest of honey) is a land of fascinating landscapes in contrast to the ugliness of poverty.

THE BIRTH OF MADHUBANI PAINTINGS

Back in 1967, a dreadful drought and famine broke into Madhubani. The district of Darbhanga introduced Sikki wares and folk paintings.

The central idea behind this was to provide work for middle-class women. Besides, it prevented the people from starving. Also, it was an experimental measure that received enormous appreciation. Furthermore, it attracted the international market.

Madhubani became the central hub to export these paintings. Hence, the paintings from Madhubani are known as Madhubani Paintings.

THE SUBJECTS OF MADHUBANI PAINTINGS

Different sects of people practised this art. Thus, there are five categories of Madhubani paintings. These are Tantrik, Kohbar, Bharni, Godna and Katchni.

The colors used are often extracted from natural sources. Madhubani has inherited every bit of nature. Right from parrots, pigeons, quails, colorful and melodious nightingales, the place has it all.

There are other religious themes that revolve around Madhubani paintings. Some of them include Hindu deities like Krishna, Shiva, Saraswati, Rama, sun, moon etc. Other features are found in Buddhism, Islamic Sufism, tantric symbols and classical Hinduism.

Women practised this art on the walls of their homes to mark special occasions.

THE STYLE OF MADHUBANI ART

Most of the Madhubani paintings signify simplicity with intricate brushwork. Geometric patterns are quite evident in these paintings. The artists fill up the empty spaces with motifs after completing a painting. A double line is usually drawn as the border.

In fact, the artists used turmeric, charcoal fire, milk & lime juice, indigo and flowers for Madhubani paintings. However, most of the modern Madhubani painters use brush and acrylic paints.

Mrs Jagdamba Devi had received an award from the President of India in 1970.

Besides her, Sita Devi and Mrs Mahasundari Devi were given a National Award in the same field. In fact, William G. Archer often compared this art to the works of Picasso and Miro.

Some of the renowned institutes are in Madhubani District, Bihar. The women in Bihar continue this art to empower women and bring up social issues.

Also, there are many organizations that are reviving the originality of Madhubani Paintings.

Pencil & Chai by Coloring India Foundation, conducts Madhubani art classes in Bangalore. It is the only art school to deliver the authenticity of Madhubani paintings.