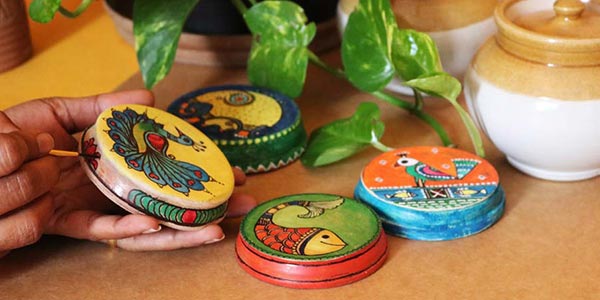 THE ORIGIN OF MINIATURE PAINTINGS

Miniature painting is a genre of art that has only evolved with every new generation. It existed in the form of religious illustration right from 11 century A.D. Both Western and Eastern India has executed miniature paintings.

Later, it inherited Persian elements from the Mughal Invasion. The word miniature has been derived from ‘minium’ or red lead, used by the Medieval illuminators.

THE VARIOUS STAGES OF MINIATURE PAINTINGS

People from both India and other countries gathered there for education. Also, they took back the religious illustrations to their own countries. The Palas used subdued tones of colours and sinuous lines. The style was natural and represented the classical Ajanta art. Unfortunately, many Mughal invaders destroyed the Buddhist monasteries in the 13th century. Few monks fled to Nepal and reinforced the art traditions.

Western Indian miniature paintings evolved in the Gujarat and Malwa regions of Rajasthan. Besides, Jainism inspired the artistic culture in western India. The Chalukya dynasty patronized Jainism then. Most of the manuscripts illustrated Jain scripts.

The manuscripts depicted exaggeration of physical traits like eyes, hips etc. The usage of forceful colors was pretty dominant. Many such manuscripts are present at Jain libraries in western India.

The Persian style of art started influencing the Western Indian Miniature paintings. It is evident from the Persian facial structures and hunting scenes. Also, the introduction of ultramarine blue and gold were from the Persian influence.

THE TECHNIQUE OF MINIATURE PAINTINGS

Miniature paintings use traditional tempura technique. The sketch is freely drawn in black or red followed by a white primer. The surface is thoroughly polished until the outlines are visible. A second outline follows with a fine brush.

The background is drawn followed by the sky, trees and finally figures.

The miniature artists mix colors with water or binder. The binders were Arabic gum or neem. The colors used for miniature paintings are extracted from natural resources like indigo, red lead ( sindur) etc. They used brushes made up of animal hair. The miniature artists used wood and clothes as painting surfaces. Besides they also used palm leaf and paper.

India is deeply connected with art right from centuries. Our role is to preserve the principles of art. It’s always good to attend a traditional art school to gain the best of authentic knowledge.